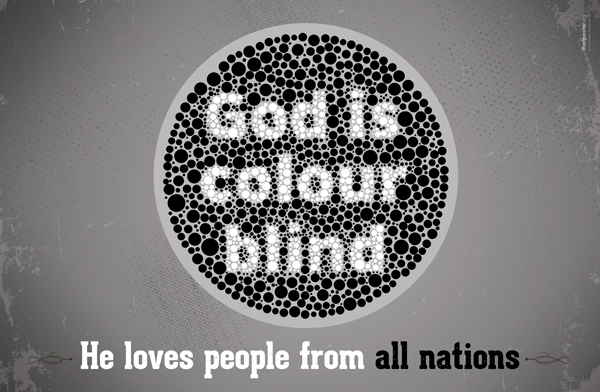 There’s a Facebook video of a dog eating a bone.  The problem is the dog’s left paw.  It keeps creeping up to the dog’s head where it’s eating the bone.  So, naturally the dog growls and snarls at the paw to warn it off.  And occasionally, because the paw won’t listen, the dog attacks and savages it.  Which is a shock because, well it hurts.  Chastened, the dog then goes back to gnawing its bone.  Really, the dog has a kind of blindness.  It can’t ‘see’ that it’s own paw isn’t an external threat.    And racism is just like this.  In fact, so threatened is the racist by a person that looks different that he or she is ‘blind’ to the striking similarities and common humanity that we all share.  And the threatened racist is more vicious than any dog.  ‘Look at their ugly faces!’ he snarls.  ‘You know they can’t be trusted don’t you?’ he barks.  And, ‘Of course, they’re an inferior breed’.     Yes racism is vicious and nasty and blind to the feelings of others.  But God cares for all people.  In fact, God is colour blind.  He refuses to see the world like the racist.  He’s blind to prejudice because every person on the planet is a precious creature that He carefully made.    And God cares about the different nations that people have gathered themselves into.  When Jesus rose from the dead after paying for the sins of the world on the cross, He appeared to his disciples and directed them to take his offer of forgiveness to all races and nations.  This is what he said,   “All authority in heaven and on earth has been given to me. Go therefore and make disciples of all nations, baptizing them in the name of the Father and of the Son and of the Holy Spirit, teaching them to observe all that I have commanded you. And behold, I am with you always, to the end of the age.”   Jesus wants all nations to know that they can be reconciled to their heavenly father.  He wants every race to taste the fellowship and friendship of God.    So, if you’ve been savaged by nasty, rabid, racist comments in the workplace, if you’ve learned to live as an outsider because your own community can’t seem to recognize that you’re a part of them, then it’s important that you know deep in your bones that you’re not genetically inferior in any way. You are God’s cherished creation.  He loves you deeply.

Prayer: Dear God, help me to love all people as you do.